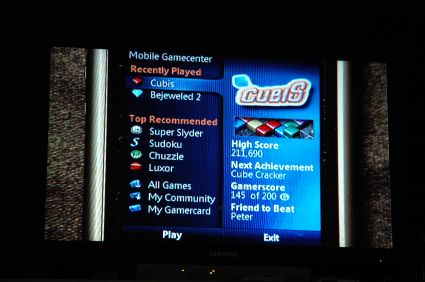 It seems that Microsoft isn’t content with just cashing in on its Xbox and Xbox 360. They want a piece of the gaming pie across the board and as such, have taken their Xbox Live Concept and expanded it to include PCs, as well as any Windows Mobile or Java-enabled cell phone. They’ve even got Nokia on board with their S60 handsets.

Basically, with Live Anywhere (as it is now known), you get a GamerTag that identifies who you are, and you can challenge any number of your friends to your favourite games, even when you’re away from your Xbox 360. Of course, the games offered for the cell phone aren’t exactly Halo, but you do get Luxor, Bejeweled, and other similar titles.

While on board, you can message friends (including game content, video messaging, etc.) and buy new content. Most of the games will come with free trials, after which you will be presented with the option of either renting it on a month-to-month basis or buying it outright. Luxor, for example, is two bucks a month or $6 outright.