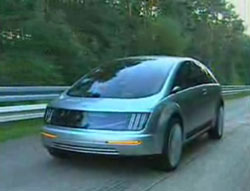 General Motors will be quick to tell you that they’re at the forefront of hydrogen-powered technology. During this latest season of car shows, they had a couple of models out there powered by the fuel based on the element with an atomic number of one. Well, they’ve gotten a working model of one of those concepts on the road for a spin. The Hy-Wire vehicle is the latest iteration of the company’s attempt to mate hydrogen fuel cells with a drive-by-wire system (hence the name).

Not to be confused with haywire, as in everything is in complete and utter chaos (of course, none of them engineers had this word play dawn on them at any point of the discussion), the Hy-Wire Concept is just that at the moment – a concept – but it is the first drivable concept to combine hydrogen power with drive-by-wire.

It’s good to see car manufacturers working on cleaner running vehicles, but they’ve really got to give these things a little more jump. The GM Hy-Wire crawls for 0 to 62mph in a tortoise-like 16 seconds.