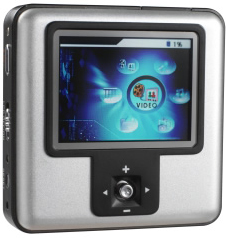 While most personal media players on the market rock a screen that is at least three or four inches, there has been a recent onslaught of tiny MP3 players that also feature video playback capabilities. The latest in this trend is an offering from Genus. Dubbed the Vizo, this pretty little thing measures a mere 2.5 x 2.5 x 0.7-inches and weighs in at just over 3 ounces.

They’ve managed to squeeze in a 2-inch TFT color display, allowing you to not only rock a wide range of tunes (MP3, WMA, and yes, even the elusive Ogg Vorbis), but also a good number of video formats as well. It’ll take care of your standard MP4, MPEG1/2, DivX and AVI movies without a hitch. They’re saying that the screen isn’t the most powerful thing in the world, but that could also explain why you can get the relatively decent four hours of movie watching out of the Vizo.

The Vizo is available now through Genus Digital for about $184.