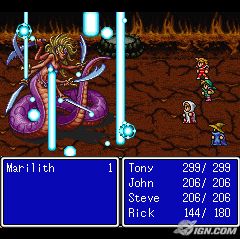 Square Enix really is milking their most successful franchise for all its worth. I can almost justify the hotly anticipated Final Fantasy XIII that is destined for the (overpriced) Sony PlayStation 3. The rehashed, three-dimensional version of FF 3 for the Nintendo DS is a bit of a stretch. Well, they’re reaching pretty far into the past for the latest mobile phone game; all the way to the beginning in fact, with Final Fantasy I.

It’s funny, really, how far technology has advanced because this is said to be a complete edition of the game based on the Game Boy Advance remake. Cell phones these days are just as powerful (if not more so) than the then-innovative portable gamer. “The sprites almost looked better,” according to one player who had a chance for a hands-on experience.

“The game seems like a pitch-perfection replica,” and the controls are simple and intuitive – the original was found on the NES which only had two buttons, after all. You don’t need to worry about dedicating a big block of your day to this game either, because they’ve thrown “quick saves” into the mix. Look for Final Fantasy I for your BREW-enabled mobile phone later this year.