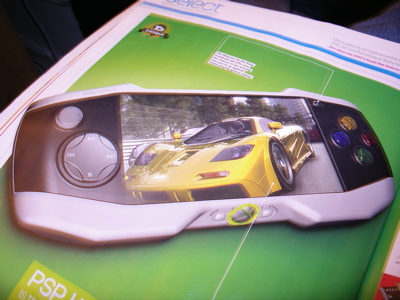 As if legitimate E3 news wasn’t enough to whet your whistle this week, there is also an abundance of rumours floating around the internet surrounding “the big three.” People are itching to find out an official launch price for the Nintendo Wii (most are guessing $249), others are musing over how the PS3 will fare, but for Microsoft, the rumour of the week surrounds a portable version of the popular Xbox 360 home console.

Word on the street is that after the Xbox 360 hit the market, the development team was split in half. The first group focused on add-ons like the upcoming HD-DVD box, while the second half are said to be working on the “Xbox 360 Portable”.

The image provided is one of the most recent concepts to pop up on the interweb and likely will not be the final design, though it does seem quite certain that Microsoft wants a piece of the portable gaming pie currently occupied by the Sony PSP and Nintendo DS.