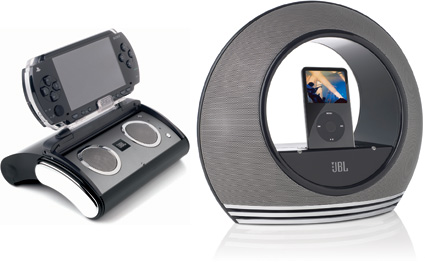 I guess after you get tired of your standard issue glossy white speaker sets, it’s time to start considering some more innovative designs. JBL is already well respected in the industry for producing high quality sound, whether it be in your car, your living room, or around your head. Well, the speaker maker is set to release a couple of new sets: the On Tour Plus designed specifically for the Sony PSP and the Radial for everyone’s favourite iPod.

First up, the On Tour Plus for the PSP doesn’t come with a heck of a lot of power – a mere six watts of juice, in fact – but the form factor is quite attractive. Available now for $130.

On the other hand, the iPod is an entertainment device through and through, and is really catching on not only as a portable unit, but also as an idol god of sorts. You see, the Radial speaker set seems to have been dreamed up by someone who loves his iPod just a little too much; the Radial looks almost like a shrine (or, I suppose, a tire, as its name implies)… and will go for $300 when it’s released in June.