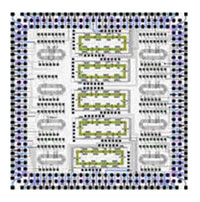 A startup chip manufacturer says it has the answer to astronomical power bills now being incurred by data centers: recycling electricity.

The company uses a grid of self-oscillating circuits that regulate the speed of the processor clock, taking all the electricity in the clock charge and putting it back in use. Performance is better in graphics processor chips because those chips are made to run at full-tilt.

Multigig says it’s working with brand-name chip manufacturers. Both Intel and Advanced Micro Devices have made loud noises in recent months about the need to cut down on power consumption.