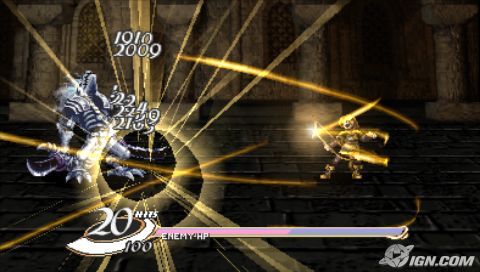 More E3 news is starting to come through the chutes, and this time we are turning to Square Enix. No, the game publisher doesn’t only do Final Fantasy – though that series in and of itself is incredibly lucrative –they’ve got a few other games under their belt as well. Valkyrie Profile: Lenneth is an action RPG that is set to hit a PSP near you.

The original game was found on the PSone, and this followup goes along with much the same formula. You play Valkyrie Lenneth as she goes around training combatants in preparation for the end of the world and battles in defence of Asgard.

The CG cut scenes look quite impressive (including some teasers for Valkyrie Profile 2: Silmeria), there are many warriors for you to collect for your ever-growing “army”, and the action looks intense. Look for Valkyrie Profile: Lenneth to hit shelves on July 18th of this year.