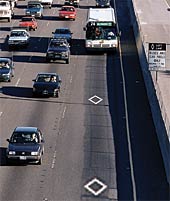 GM and Ford feel like they are being picked on and discriminated against by the states of New York and California. They allow single drivers with a hybrid vehicle to drive in the carpool lane, however the hybrid must get 45 miles per gallon or better. This means that only the Toyota Prius, Honda Civic and Honda Insight, for now, can meet (and exceed by quite a bit) those standards. The American hybrids aren’t yet even close to that level of efficiency. Ford believes that they are being treated unfairly, and that the laws are discriminating against American manufacturers.

They want the federal government to force the two states to let their cars in the less-crowded lane, figuring that it could be an incentive for sales. The Feds have a law from last August which would open the lanes to hybrids that have 50% better mileage on the highway or 25% better mileage in all cases than the identical gas powered car. GM and Ford want the government to force New York and California to apply that law instead of their own, more restrictive version. That’s one approach. Or the two companies could quit whining and keep improving their technology to stay (or get) competitive with their Asian competitors.