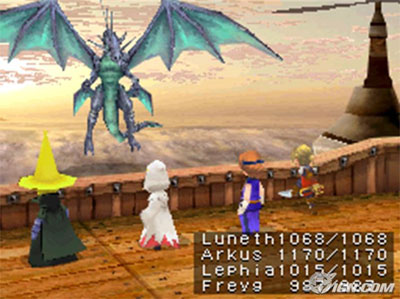 The only title in the Final Fantasy series to never get an official English language version was Final Fantasy III. Well, the good people at Square Enix are finally getting around to doing that, nearly twenty years since the game’s original release on the Famicom in Japan. That’s not the only change that you’ll be experiencing, as they’ve done away with the old school graphics, opting for a three-dimensional redesign for this Nintendo DS title.

Moreover, they are retooling Final Fantasy III to make use of the touch screen capabilities found on Nintendo’s “touching is good” portable gaming machine. The stylus can be used to direct your characters, perform attacks and more, but if you prefer the more traditional control scheme, you can opt to use the D-pad and face buttons.

The game is in full 3D, running at 30 frames per second, and looks absolutely gorgeous. One drawback in the demo version being rocked around E3 was the lack of use of the DS’s top screen, though this is not the finalized version of the game, so that may change before the game’s release sometime later this year.