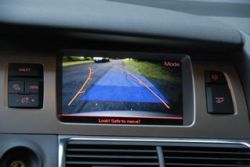 Are you terrible at parallel parking? Tend to back up into poles or pedestrians? Get an Audi Q7 SUV. When you put an Audi Q7 in reverse, a screen on the dash displays video from a rear mounted camera that shows you where you will be going.

No big deal. That technology has been in vehicles for a couple of years, including the Honda Odyssey and the Toyota Sienna among others. What makes the system in the Audi Q7 different, though, is the parking and reversing aid that is part of the display. Two lines on the display show you where your vehicle would move based on the current position of the front wheels. Move your front wheels and the display adapts accordingly. No more looking like an idiot when you run into the curb as you are trying to maneuver into a tight space on a crowded street with all sorts of people around.