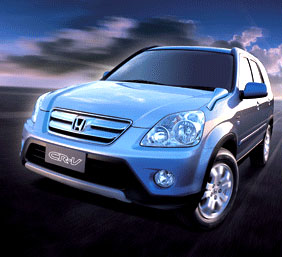 Arguably, the whole craze with hybrid cars may have initially started with the Honda Insight, but it was the Toyota Prius that popularized the trend toward gas-electric powerplants. Well, Honda is working hard to recapture that market and has been releasing an onslaught of hybrid cars lately, including variations of the Civic and Accord. Well, the automaker is set to throw some hybrid power into a couple more cars: the CR-V and Fit.

The Fit was just released in North America a couple of months ago, but they are already planning on throwing the same engine as the Insight into this new sub-compact car with multiple seating arrangements. The Fit Hybrid is expected to launch around the middle of next year.

The CR-V is receiving a facelift for the 2007 model year, and this seems to coincide with the hybrid CR-V as well – much like what Toyota did with the Camry Hybrid. No specifics have been given regarding the power output of this new crossover, but we should be expecting the hybrid CR-V in showrooms near the end of this year.