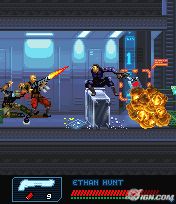 Mission: Impossible III was the top movie over the weekend – no surprise there – but the action doesn’t have to stop after you leave the theatre. Take the suspense and adventure with you and download the Mission: Impossible III mobile game for your cellular phone. While it may seem like your typical action game (and it sort of is), the editors over at IGN call it “one of the best-looking 2D mobile games I’ve ever seen.”

Most of the action is your standard side-scrolling action fare, with Ethan Hunt sporting everything from a shotgun and assault rifle clear through to a grenade launcher and more. They’ve included a few close-combat attacks as well, even the ability to “grab a guard by his neck and then shoot him in the gut.”

You’ll also get a few top-down helicopter shooting missions and a few mini games to keep the puzzle action going, but it’s all over in about an hour and a half. And not that you’d be able to notice on such a small screen anyways, but there’s no Tom Cruise in this game.