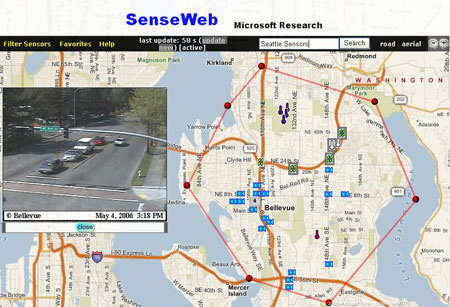 Microsoft has a word for Google Earth: SenseWeb.

The Redmond, Wash., software giant is working full tilt on a sensor-mapping application titled SenseWeb that will provide users of PCs, laptops, handhelds, and mobile phones with information about traffic flows, restaurant wait times, and much more real-time data. The providers of this information are intended to be both automated sensor equipment and human volunteers. The goal is to fold SenseWeb into Microsoft’s existing Windows Live Local online mapping platform, with the result maps and even real-time photos that you can really use.

It’s all part of a bigger battle to be first with the best—in this case, with the most up-to-date information about a variety of statistics. One of the goals of SenseWeb is to track gasoline prices and provide the users with the lowest available pricing in their designed area.

Microsoft is in a fierce battle with Internet titans Google and Yahoo in an effort to provide the most useful online mapping services. Such services are available to computers as well as handheld media devices, including mobile phones that have Internet access.

The most difficult requirement for the project would seem to be obtaining the data in the first place. If you want to make a choice between all available gas stations or restaurants in a given area, you’re going to want as many choices as you can get. And that means that those gas stations and restaurants will have to want to be part of the service and actively and regularly provide data from their establishments. That might be a tall order, especially since the data will need to be streamlined on either end of the data stream in order to provide the end user with understandable and accurate information.

Still, it’s a noble goal, many at Microsoft and elsewhere believe. Keep that smartphone or laptop handy next time you’re zooming around the freeways and byways. Someday soon, you can shop for low prices and wait times without ever leaving your vehicle.