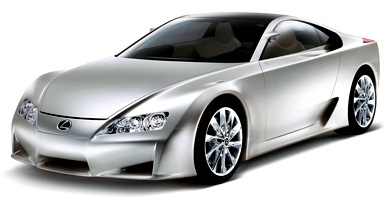 Ever since the Supra left the company’s lineup, many auto enthusiasts have been itching for another supercar from Toyota to no avail. Well, the wait seems to be coming to a close pretty soon, but interestingly, the new LF-A supercar will be badged as a Lexus, the company’s luxury brand. Nonetheless, it will still receive all the go fast goodies to get your adrenaline pumping. In fact, Toyota has just announced a number of upgrades to the LF-A.

For starters, they’re adhering to the old adage – there’s no replacement for displacement – and upping the 4.8L V10 engine to a full 5.0 litres. This revised powerplant will put 500 horses under your control, topping out at around 200mph. In addition, the aluminium chassis has been discarded in favour of a carbon fibre version instead.

The Lexus LF-A, weighing in at 2600 pounds, is said to be the “most luxurious, best handling and safest supercar ever.” Look for the hot ride to make its debut as a pace car in the 2007 Japanese Grand Prix.