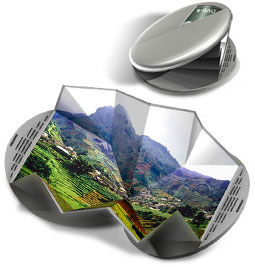 Here’s a concept which lets you watch DVD movies on the go, with a screen that won’t make you go blind from squinting, and you won’t get a sore back from carrying it around. It’s a DVD player with an e-paper screen which folds out like some fancy origami project when you want to watch it, but folds up nice and small (and presumably light) when it is not in use. It’s a concept created by Inventables, a studio near Chicago. Though it is highly unlikely that it will ever become reality, the e-paper screen is actually in the works from an Israeli company called Mag-Ink.

A very cool concept, interesting too, but one that is almost past its usefulness even if it could be true. With all of the media players and digital formats, a DVD player, no matter how small, is something we won’t likely be shopping for a few years from now.