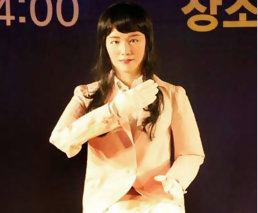 She might not exactly be a woman. That’s the case with Eve, an android making its way around South Korea these days. She has the body of a woman and the vocal chords of a woman, and she can express human emotions. She talks in Korean, of course, knows 400 words, and can answer your questions both verbally and nonverbally. Her skin is full-on silicon (which, come to think of it, is a fuller version of the plastic surgery that many people have today).

Her full name is EveR-1, and her creator is Korea Institute of Industrial Technology. The company says that Eve has 35 miniature motors throughout her body. She uses these motors to express anger, sorrow, joy, and a host of other emotions.

The cost of designing and building Eve was US$321,000. The company says there’s more on the way, with the year-end target being another android that can sit and stand by itself.

Kind of makes you glad you lived this long.