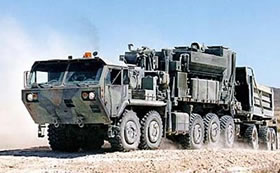 The U.S. Army is going green for their heavy hauling. They have ordered hybrid versions of the Heavy Expanded Mobility Technical Truck, or HEMTT, from OshKosh trucks, the exclusive maker of the HEMTT vehicles which the army uses for heavy hauling. The diesel hybrid models will increase fuel efficiency by 20%, which will make quite an impact since the vehicles only currently get 3-4 miles per gallon. It also uses regenerative braking to create up to 300 kilowatts of power, enough electricity to power a city block.

Besides the fuel savings, a major advantage of the hybrid version of the vehicle is the noise. Existing diesel HEMTTs are so loud occupants can’t converse, but the hybrid prototype is no louder than a typical sedan.

Since 70% of the cargo load for the vehicles is fuel, fuel savings mean that more fuel is available for other vehicles. No word on what the hybrid vehicles will cost the army, though it will likely be more than the $200,000 to $400,000 that the diesel versions run.