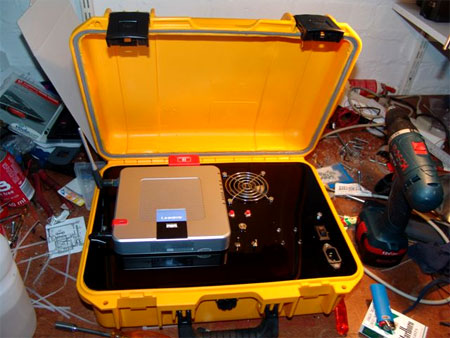 Wireless really isn’t wireless unless you eliminate the wires. We know a guy who has done just that.

It’s a 3G router that is truly mobile. And, it’s more than just the router. It’s Wi-Fi in a to-go box.

So our hero and Mobile Magazine reader Brent Hudson has placed the router and 3G card in an airtight, shock-proof Storm Case. He’s added a few printed circuit boards, a cooling system, and (of course) a battery.

The battery is a standard 12-volt 7000mA gel cell model that lasts from 8 to 10 hours and has a cutout that will keep you from draining it entirely. The device itself has two power supplies. One is for charging the battery, and the other is for running the router. Both power supplies have heat sinks, and air vents out below the router.

Did we mention that it runs on mains as well? You can toggle back and forth between three options: battery only, mains only, and mains plus battery. LEDs remind you which state you’re in.

It’s all a homemade solution to the “wired” problem of the Wi-Fi router, excellent for remote location connectivity. More pictures on Brent’s site.