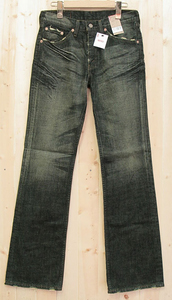 Now you can get Levi’s with RFID tags, too.

Levi Strauss & Co. has tested installing RFID tags on clothing that was shipped to three stores—two in Mexico and one in the U.S. The initial tests are designed to track inventory, not people, Levi’s says. The clothing manufacturer has said that it will not use the radio frequency identification tags in Levi’s brand stores.

Still, the move has touched off a new round of complaints from privacy advocates, who object to the use of RFID tags on any level because of the potential of an invasion of privacy. Conceivably, assuming that the people who buy the test-case Levi’s clothing do not have the RFID tags removed, someone with an RFID reader could track the movements of people based on what they are wearing.

This Levi’s announcement comes in the wake of the formation of a working group of major companies (including a who’s who of giant companies including IBM, Intel, Cisco, Microsoft, VeriSign, Visa, and Procter & Gamble) and a set of best practices for RFID use.