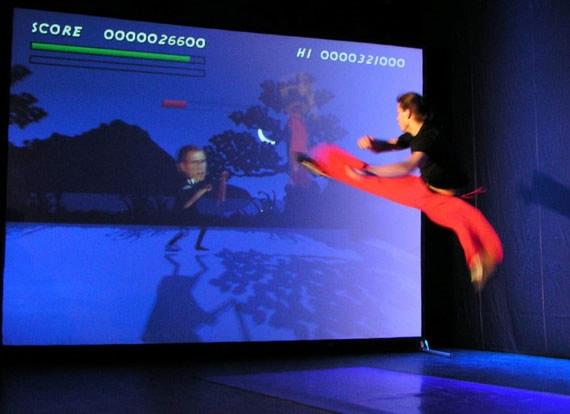 Here’s one video game that I certainly won’t be playing. Kick Ass Kung Fu is a new game that puts you right into the fighting action. A camera records your punches and kicks and the rest of your moves, then puts them right onto the giant screen. It’s still a prototype right now being developed by researchers at Helsinki University of Technology. I say that I’d never play it because I would almost certainly hurt myself. Badly.

The researchers have formed a company called Animaatiokone, this unpronounceable corporation will commercialize the idea and bring it to home consoles. One of the first problems will be shrinking it. Currently, the game takes up an entire room. The home version will have to recognize and translate movements on a much smaller scale, and be safe enough for little Bobby to accidentally to walk by without getting a drop kick to the head. The game should be fairly authentic, though. 46 martial arts experts were used to test the game. The 2006 World Karate Championships are in October in Finland, so fighters will be trying it out there, too.