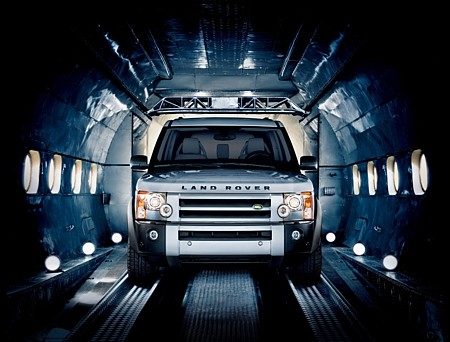 If you’re Land Rover and pretty confident that the satellite navigation system in your vehicles is as good as it gets, what kind of a stunt could you come up with to prove it? Money probably isn’t much of an issue, either. The braintrust at Land Rover came up with a doozy. They loaded a 2006 Land Rover LR3 into the cargo hold of a C-130 Hercules cargo plane, and then flew the plane from Nice in France to the island of Corsica using only the car’s navigation system to navigate. I’m not sure exactly what the stunt proved, but it got us talking about it at least.

Sally Eastwood, VP of marketing for Land Rover, was pretty proud of herself: “This is a truly extraordinary demonstration of the capability and adventure inherent within all Land Rover vehicles, and the LR3 in particular.” That’s a bit much, maybe. I’d be truly impressed if they had also used the car’s wheels to land and the steering wheel to steer the plane. Still, it’ll make for a better commercial than most car makers are throwing at us these days (and yes, I am talking to you, Kermit).