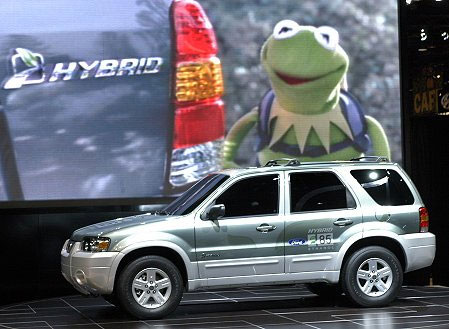 Turns out that that Kermit the Frog is a heck of a salesman. Or salesfrog, I guess. Ford Motor Company has announced that hybrid sales in April were up by 50% when compared to April of 2005. The total is still a relatively small 2,800 units, but the growth is impressive. They are particularly impressive when you compare them to March of this year. Sales were up by 75% from one month to the next.

There are a number of factors contributing to the increase. Incentives, most notably the zero percent, 60-month financing on Escape and Mercury Mariner hybrids, made the vehicles much more attractive. Government tax benefits for hybrid vehicles certainly don’t hurt. The rapidly escalating fuel prices get the attention of people who want to find a way to make their monstrous vehicle more affordable to drive. The company has also been spending more on advertising, including all the Kermit ads.