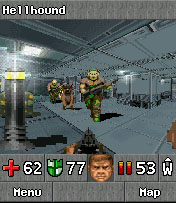 ID Software is at it again, they released Doom around this time last year, and have now announced their plans to continue making games for the mobile industry.

So if you liked Doom, you’ll probably love Orcs & Elves. That’s the newest game from id Software and Fountainhead Entertainment. The fantasy role-playing game is being released by Electronic Arts and will be available on Verizon Wireless Get it Now starting on May 9. That’s a couple of months before the rest of the nation will be able to get their hands on it.

This is one of the first really major moves that EA has made since making a big splash in the mobile gaming sector by buying Jamdat Mobile for $684 million in February. It’s also another example of the increasing importance of the mobile gaming sector, since this game is developed specifically for mobile play. That sector was estimated to be worth $2 billion in 2005, and that’s just the very beginning.