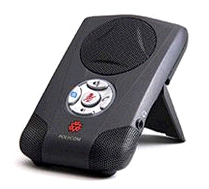 Skype, one of the leaders in the VoIP revolution, has contracted with Polycom, a communications device expert to produce a USB speakerphone designed specifically for Skype users. The official name of the handy new device is the Polycom Communicator. It is designed primarily for two-way voice conversations, but it doubles as your computer’s audio output device, enabling high-fidelity output for music and games, up to 22kHz in frequency.

This device is about the size of a PDA, so you can take it with you when you’re on-the-go. It also has a headset connector, for when you want to turn your conversation private. And, the USB cable that you need to connect it to your computer can be stored right in the speakerphone itself.

Other helpful functionalities include call function buttons right on the speakerphone, allowing mute, volume control, and calling pickup and hangup.

Look for this device in the next few weeks. Initial price is expected to be US$129.