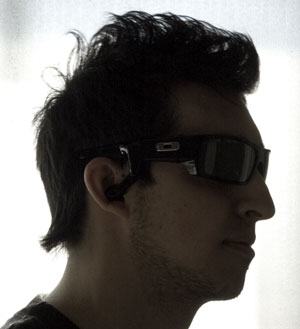 When Oakley first released the Thump line of digital audio eyewear back in December of 2004 they had one thing in mind, to make on-the-go music listening a seamless integration with your daily lifestyle. Now almost 1.5 years later, the Thump has evolved into a new style with a serious hardcore look, dubbed the Oakley Thump 2.

I wasn’t a big fan of the original Thumps, they were a bit too sporty looking for my liking. The Thump 2 however has an aggressive, dog pound, street punk look to them, if you know what I mean. As you can see I tried very hard to portray that image in the photograph, this technique was achieved by taking the picture first thing in the morning, without shaving, bed-head and all.

Taken from the original Oakley “Gas Can” sunglasses, the Thump 2 design adds the obvious, MP3 playback capabilities and integrated headphones. It’s available in 256MB ($299), 512MB ($349) and 1GB ($449) versions. One of the changes the Thump 2 took on from the Gas Can’s was the addition of soft rubber pads on the inside arms. These grab the sides of your head for extra grip. And rightly so, you wouldn’t like a $450 pair of glasses slipping off your head into the pavement, or worse, water. Oakley made a good decision when adding this feature.

Simple controls. The top of each arm has buttons, the right side has Power, song advance and skip back, the left side has the volume controls. These are easily accessible to you while on your head, making it a flawless piece of wearable technology. The earbuds have not one, not two, but three pivot joints, this allows for getting that sweet spot angle with the right sound and comfortable fit to your oddly shaped ears. I usually have problems wearing tiny earbud headphones, like the Apple ones and such, they never sit right with me. The Oakley’s can sit on any angle you like, how far in your ear you want, higher, lower – the positioning is completely up to you.

Setup is a breeze, it comes with a USB 2.0 high-speed interface, connect the cable, it comes up as a mass-storage device, from there you just simply drag and drop files. It supports iTunes .M4A files, as well as the traditional Mp3, WMA and WAV. The USB connection is also how the glasses charge themselves, via your computers USB port.

I’m one of those guys that loves to take stuff apart. I saw two screws on each side of the Thumps just asking to be opened. Inside I found a 3.7V 150mAh Lithium-ion battery and some type of sensor. I suspect it detects if you are wearing the device for auto shutoff capabilities. Everything is packed in nice and tightly, the circuit board is very minimal with the audio processor being one of the largest components, besides the battery.

I had fun wearing the Thump 2’s, people on the street give you that “he must be some crazy techno-geek” look. They are very practical for the outdoorsy types who would like to carry next to nothing around with them but maintain that aggressive sporty look. However there still is that question everyone keeps mentioning, how can I listen to music indoors? I can simply say one thing, not with these, unless of course you don’t mind tripping on coffee tables, walking into doors or portraying Wesley Snipes in The Blade.

– Absolute music freedom with no wires or cords to dangle or tangle
– Store up to 240 songs on the 1 GB version, up to 120 songs on the 512 MB version, or up to 60 songs on the 256 MB version
– Solid-state NAND flash memory with no moving parts
– Up to 6 hours of playback time on a single charge
– Three-color indicator light to show battery level
– 75MHz DSP with 18-bit Sigma Delta DAC for state-of-the-art audio fidelity
– Custom Mylar speakers with three directions of movement for precise positioning
– Patented XYZ OPTICS for razor sharp clarity at all angles of vision, even at lens periphery
– Lens contours that maximize protection against sun, wind and side impact
– PLUTONITE lens material to filter out 100% of all UVA, UVB, UVC and harmful blue light
– Durable and lightweight O MATTER frame material
– Supports storage of data files along with song files
– Includes High Speed USB cable for transferring song files from Mac or Windows PC
– Prescription Ready