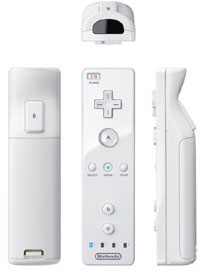 That’s the motto at Nintendo, which has named its next-generation game console the togetherness-sounding Wii. It’s pronounced “We.” Nintendo officials are stressing the inclusiveness of the name, asserting that the box is for gamers and nongamers alike. The use of two of the letter I is intended to invoke the machine’s game controller, which is a one-handed device that looks like nothing more then that eponymous TV/DVD remote populating households across the globe.

You won’t be getting the Wii controller mixed up with your TV remote, however. The tall, thin, white device is motion-sensitive and can respond with lightning speed to your commands; swing a golf club or tennis racquet or make an onscreen character jump over a barrel.

Up until now, the console had been called Revolution. The machine, expected to be a competitor to Microsoft’s Xbox 360 and Sony’s PlayStation 3, will be released in November.