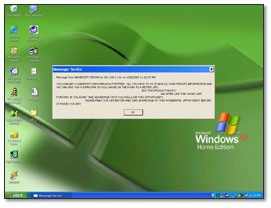 The software giant has completed a significant upgrade to its Genuine Software Initiative, which is guaranteed to create headaches for the majority of hackers who steal the Operating System (OS). The name of the police tool is the Windows Genuine Advantage (WGA), and it has possibly the most annoying computer feature ever invented—the popup.

If you, wittingly or not, install a non-genuine version of the Windows OS, you will see a popup informing you of this “error” when you first log in. You will see this popup every subsequent login attempt. You can’t delete it because it’s embedded in the OS. The only way to get rid of it is to click on the handy link that is included in the popup. That link will lead you to the Microsoft website, where you can properly purchase the OS.

Did we mention the companion popup that appears near the system tray? Yeah, that one doesn’t go away either. Even after you log in, you’ll see that little reminder that you’re not exactly playing by the rules, even if you bought your OS in good faith.

Oh, yes, you won’t be able to download Internet Explorer 7, either. You’ll be stuck with the current version, which should be obsolete in a year or two.