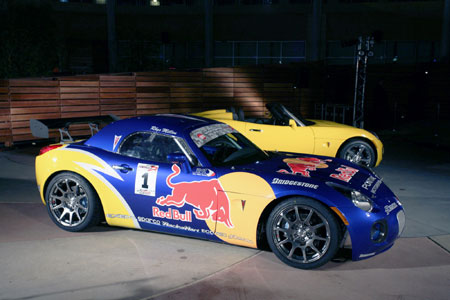 Rhys Millen, if you don’t know him, basically he’s the king of drifting. He was the 2005 Formula Drift champion and drove a Pontiac GTO to that title, but, with the demise of that vehicle, Pontiac has unveiled a new ride for him. The Red Bull Solstice GXP Drift will feature a race-modified turbocharged Solstice GXP 2.0 Liter ECOtec engine that produces about 500 horsepower. That, sadly, is twice as much power as the street legal GXP will have when it hits the showrooms in the fall. One difference for Millen to get used to will be the wheelbase. His GTO had almost 110 inches under him, while the GXP has a wheelbase of just 95.1 inches. That will make a big difference in feel.

Though the Formula D season has already started (Millen was second in the first event), we won’t see him behind the wheel of his new car until June 10 at Soldier Field in Chicago.