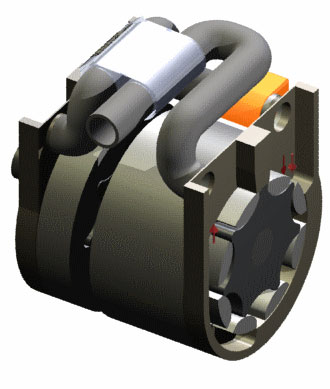 StarRotor Corporation, a company founded to commercialize discoveries from Texas A&M University, has developed a new engine for vehicles that could dramatically increase fuel efficiency. The StarRotor engine derives its power from the Brayton cycle, which is the same thermodynamic cycle used in jet engines. Whereas a typical combustion engine is 15-20% efficient, the StarRotor is projected to fall more in the 45-60% efficiency range. Simple math will tell you that fuel efficiency will triple.

The benefits don’t end there, though. It provides low pollution, and is multi-fuel capable. That means it could burn gas, diesel, kerosene, or even vegetable oil. It’s quiet and produces no vibrations. Requiring about 10% of the parts of conventional engines, the StarRotor also needs very little machine work to produce, so production costs for the engine will be low, too. The company has no immediate plans to make the engine available, but hopes to have it on the market by 2010.