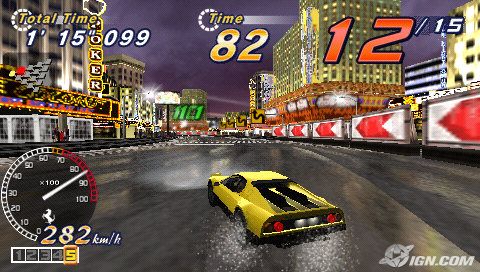 Sega hasn’t been in the hardware business for some time now, but they still pump out some killer software. If you’re feeling the need for speed, but need to take it with you on the go, you can now pick up the company’s latest racer in OutRun 2006: Coast 2 Coast for the Sony PlayStation Portable (PSP).

While franchises like Juiced are catering to the “tuner” market and more readily available vehicles like Civics and Lancers, OutRun is sticking to its guns and taking the official licensed exotic route instead. In Coast 2 Coast, you’ll find no fewer than twelve Ferraris, including the hot F430 and 575 Super America. The game, as its name implies, on a high speed road trip across the country, from Palm Beach to Cape Way.

Available now in stores, you’ll find your standard offering of game modes, including missions and license mode, or you can take it online and challenge your fellow enthusiasts. OutRun 2006: Coast 2 Coast is available now at a retailer near you.