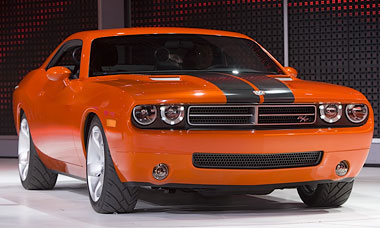 Now that the Dodge Challenger Concept has completed its rounds on the auto show circuit, the people over at Daimler Chrysler are hard at work trying to figure out how to go about pumping out a production version of the hot retro automobile. Most recent reports have the carmaker not taking the mass market route that the Ford Mustang has taken, but will rather restrict the Challenger to a limited number, creating its own little niche market. Pricing is expected to be higher than the Stang.

While the Mustang has a V8 as an option, with only 30% of the Ford sports car being sold with the beefier engine, it seems that the Challenger will only come in a V8, and thus is targeted squarely at the people bent on having powerful muscle cars. That said, they still need to figure out where to manufacture the Challenger – which is based on the same platform as the Chrysler 300C, Dodge Magnum, and Dodge Charger – as that facility is already at its capacity.

It does not make economical sense to open up a new plant altogether for the Challenger, so they will have to wedge it into an existing plant. They want to build it “tomorrow”, according to Joe Eberhardt, VP of marketing for Chrysler, but until they overcome these hurdles, we won’t be seeing a Challenger on the road any time soon.