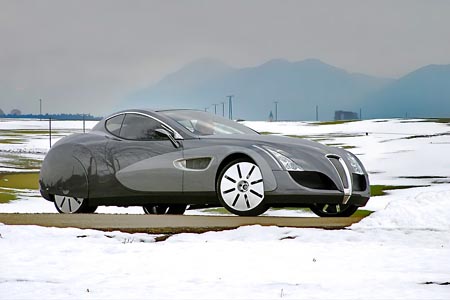 I can’t help but think of World War II references when it comes to news about Russians teaming up with Germans on a project, but I’ll do my best to set those aside. The German firm GERG has teamed up with an automaker based out of Russia, Russo-Balt, and the fruits of their partnership have emerged to reveal the Russo-Baltique Impression. This supercar is still in the concept stage and won’t be seeing the light of a dealership any time soon, but it certainly is quite the sight to behold.

Reportedly based on the Mercedes CL 65 AMG (you don’t see the family resemblance either, do you?), there isn’t much else known about this hot little number. Personally, I find it to be a bit too narrow with an almost Batmobile feel to it. Some have even commented that this will sell well to rich eccentrics. Maybe so.

To get an in-person look at the Impression, you’ll need to head over to the Villa d’Este Concorso d’Eleganza where vintage vehicles meet cutting edge concepts (like this one).