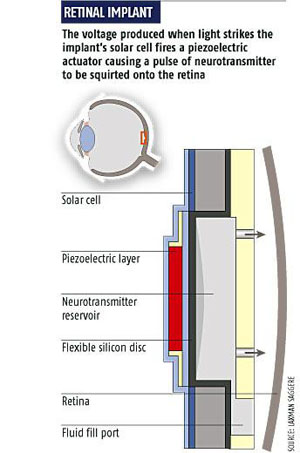 In the drive to replace faulty eyes, scientists have turned to solar power to run their implantable devices.

An article in New Scientist describes just such a device. A solar-powered chip jolts retinal cells into action by blasting them with neurotransmitters. Because solar power is the engine, it doesn’t heat up; in fact, the power use is minimal because it needs no external batteries.

The device, which is just 15 micrometers thick and 1.5 millimeters in diamater, takes the place of the body’s photoreceptors, which are damaged in people who have sight difficulties. The result is an end to macular denegeration and other degenerative conditions.

It’s all the brainchild of Laxman Saggere, an engineer at the University of Illinois at Chicago. Saggere hopes to make his prototype into a more mainstream device in the coming months.