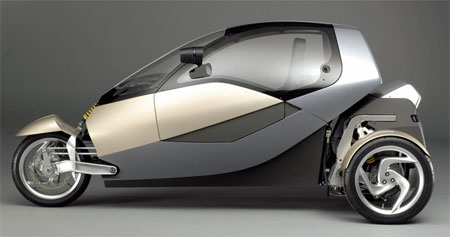 While certain segments of the automotive industry are moving toward bigger and more powerful vehicles, there is also a huge push for more environmentally friendly people movers. Well, BMW has been working with the University of Bath for several years now on the CLEVER concept, and all that effort has finally come to fruition with the announcement of the compact trike on Friday.

The two wheels in the back remain stable much like a four-wheeling car, but the front end of the car (and the single wheel in front) tilts much like how you would on a motorcycle. To prevent the CLEVER from tipping over while cornering at high speeds, they’ve implemented a hydraulic active lift system to keep the vehicle grounded. It’s just three feet wide, and is said to be as fuel sipping as it comes at an estimated 188 miles per gallon.

There is room for one passenger, who sits directly behind the driver, but don’t expect a heck of a lot of cargo space. Top speed is in the 50mph range, and if this ever makes it to production, they’re saying that the price tag will be in the neighbourhood of $10,000.