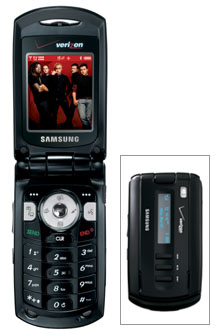 Hearing about all the new phones being released by Samsung for the Korean market is one thing, but catching just a wiff of the possibility that one of their hot handsets could actually become available to the North American public, is something different altogether.

We already have a good feeling about the Motorola Q heading to Verizon’s lineup, and now it seems that the wireless service provider just might be adding the hot A930 clamshell from Samsung to its stores as well.

There’s nothing official yet, as there has been no announcement made and no official page launched on the internet, but someone over at the company did upload a picture of the Samsung A930 complete with Verizon branding.

In case you didn’t catch the news about this phone earlier this year, it’s a multimedia clamshell with external music controls, microSD expansion, a 1.3 megapixel shooter, and the expected Bluetooth connectivity. Keep your eyes and ears peeled for something firm from Verizon, and be sure to send in the tip if you hear anything.