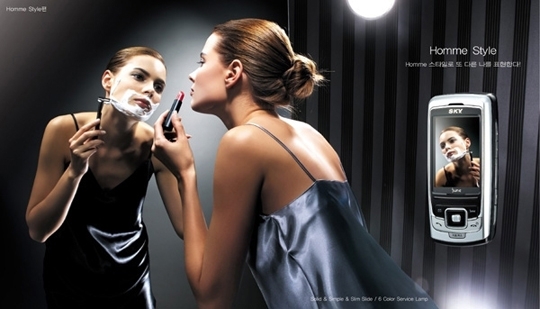 Pantech & Curitel are set to release a new handset that will appeal to just about anyone who wants a cell phone. The ad campaign is a little off-putting with a woman shaving while putting on makeup, and another model sporting a mustache, but if you cast those images aside for just a moment, you’ll find quite the impressive package in the Sky IM-S100.

The thin slider phone comes jam packed. Starting with a built-in MP3 player and 256MB of internal memory to keep the tunes going, while shutterbugs can get their snapshots on with the 2.0 megapixel camera. There’s also Mbank and a 33000 word dictionary on board to boot.

You’d expect a higher price point out of this handset, but they are suggesting 400,000 won (about $422). It’s really too bad, because like just about everything else we hear about from Korea, they’re keeping the Sky IM-S100 from P&C for themselves.