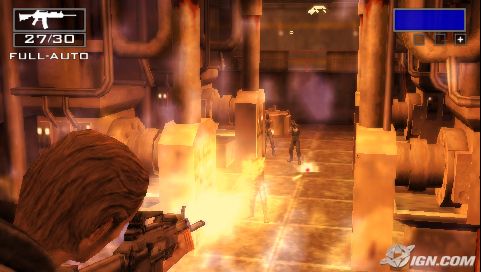 I was a little too young at the time to get caught up in the Miami Vice television series, but it was a humungous hit with my older brother and his cohorts. You could be a gun-slinging, smooth talking cop without having to be the stereotypical stuck-up type. Rather, you were cool and, er, “well dressed”. Well, Michael Mann is at the helm for the upcoming movie, and you can also take the action with you on the road with Miami Vice for the Sony PSP.

The story for the game takes place just before the action of the movie, so you don’t have to worry about ruining the flick for yourself if you happen to start fighting your way through the PSP title first. As expected, it’s a shooting game, but they’ve included a rep-based RPG side to it to add a little depth to the game. You can choose to play as Crockett or Tubbs, and the computer will control the other character for you as you progress through the game. Alternatively, via wireless ad-hoc multiplayer, you can get a friend to pick up the slack.

Look for Miami Vice for the PSP to start shipping in July (North America; end of August for Europe).