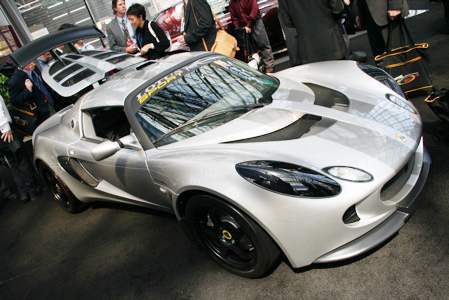 Lotus Sport is making some of the sexiest and highest performing race ready cars out there. Unfortunately for American fans, though, they haven’t been available in the U.S. Until now. Lotus used the New York Auto Show as the platform to announce that the cars will now be readily available to American consumers. They also announced two new Elise models that will hit our shores.

The first is the Lotus Sport Exige Cup. There is no question that it was built just for the track. It doesn’t have air conditioning or even headlights. What it does have, though, is a Toyota based, Lotus tuned 1.9L four cylinder that kicks off 243 horsepower and uses a 6 speed gearbox to rocket from 0-60 in just 4.1 seconds. It will cost $78,990, but you’d better hurry if you want one, because only 15 will be made available in North America.

The second car is the Lotus Sport Elise, which is like the classic Lotus Elise on steroids. It’s street legal, but comes with racing touches like a standard roll cage and racing harness, competition clutch and adjustable Ohlins dampers. There will be 50 of them available and each will cost $54,995.