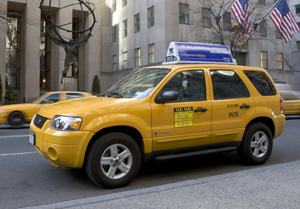 New York and San Francisco employed a group of hybrid sport utility vehicles as a test for a few months recently, the move received good reviews from both customers and cab companies. The SUVs were Ford Escapes, and they were a combination gas-electric models that were US$4,000 more each to purchase.

Customers reported being pleased with the ride and with the green nature of the hybrids. In general, the SUVs were more comfortable than what customers were used to riding in when they hailed a cab.

One of the main questions was whether the batteries would stand up to the withering punishments of the mean streets of two of America’s largest cities. The answer seems to be yes, as all are approaching the 100,000-mile mark with their bodies and peripherals intact.

Cab owners reported a savings of up to US$31 on fuel and US$5 for air conditioning for each 300-mile shift. In addition, the brakes were lasting longer than the gas-only counterparts, mainly because the electric engine has a secondary function as a backup braking system, taking much of the strain off the “real” brakes.

Representatives of cab companies in both cities also were pleased with the environment-friendly nature of the hybrids.

Other big cities, including Chicago and Las Vegas, will soon employ hybrid taxis of their own.