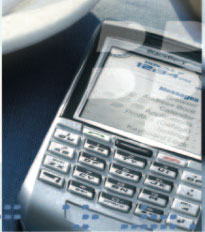 For a while there it probably wasn’t much fun being an investor in Research in Motion. The Canadian company that makes the BlackBerry found themselves one judge’s decision away from disappearing during a patent battle with NTP. The news is getting better, though. Despite having to pay $612.5 million to NTP to settle the case, RIM managed to post a net profit of $18.4 million for their fourth quarter which ended March 4. That amounts to earnings of 10 cents per share. Without the settlement and associated costs adjusted earnings would have been 65 cents per share. Revenue for the quarter was $561.2 million, up 39% from the $404.8 of the same quarter last year.

The next quarter will be interesting to watch for the company. RIM forecasted that their revenues in the quarter will be $580 million to $610 million. That will be an increase over the previous year, but well under the $625 million that analysts were expecting. The closer they come to the bottom of their range, the worse their stock will be hit. But at least their business is still intact.