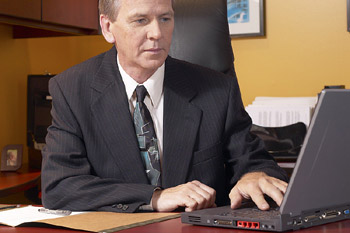 Popularity of laptops and wireless networks are making telecommuting a pretty standard business practice these days. With all this remote access going on, the accessibility of corporate files off company premises become worrisome, it goes without saying that more companies are increasing their security perimeter to include the home computers of their employees.

That’s a lot of opportunities for hackers to seize computer secrets, especially given the inherently lower level of security found in most home computer systems.

One of the industries with the highest instances of telecommuting is health care. Security breaches of patient confidential records are the nightmare of physicians and hospitals everywhere, and it is probably no surprise that these companies have some of the highest levels of network and file-access security.

It’s not just anti-virus software, either. A great many companies require their employees to log on to the computer network via a Virtual Private Network, which features not only secure username and password access but also heavy-bit encryption patterns. Some networks allow read-only access to employees.

Financial services are progressing toward telecommuting as well, with appropriate security features. Current encryption functionality allows for protecting even the most important financial information, but security risks still exist. Even the slightest risk is too much for most government agencies, although some are gravitating toward the trend one step at a time.

One main thing that companies urge their telecommuters to do is to avoid mixing business and pleasure. In other words, the work home computer is not the family home computer. Even the strongest of firewalls can’t prevent the kind of data mixups that are certain to happen when the family doctor is also the head of a family of four computer literates.

This echoes the policy of some other companies, which allow telecommuting only by employees who use company-issued PCs. These are usually bare-bones machines capable of doing only what the employer has equipped them to do.

There will always be risk involved in telecommuting, especially if it’s done over wireless networks that can be hacked more easily than wired ones. But working from home (or the Starbucks down the street) seems to be a trend that is here to stay.