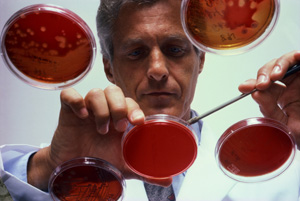 Now here’s a sticky situation that people will want to pursue.

Researchers in the U.S. have discovered a super-super-super glue that is commonly found in nature. It’s the byproduct of Caulobacter crescentus,a common bacteria that you can find on the inside of water pipes. These bacteria secrete a substance that allows them to survive an otherwise crushing force of five tons per square inch. In commercial terms, that’s three times as strong as the strongest “super” glue now on the market.

Scientists are delighted with the scientific possibilities for this glue, including using it to keep bandages attached to people and animals and to keep fillings in teeth.

The bacteria can be found in rivers and streams, as well as water pipes, it attaches themselves to the surfaces using a long, slender stalk that is covered with groups of sugar molecules. It is those sugar molecules that make up the super-super-super glue.

Mass production obstacles have to be overcome, of course. But researchers hope to be able to market this glue within the next few years. Kind of makes you want to scrape a drain, doesn’t it?