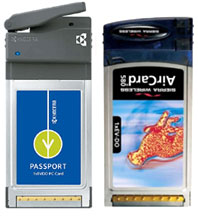 Telus launched their first ever EVDO-capable (for Evolution, Data Optimized) wireless network card for notebook computers one year ago this May. Since the Sierra Wireless AirCard 580 could only operate on the CDMA 1x network at the time, it was just a taste of what Telus had coming.

I had a chance to get on the newly upgraded Telus CDMA 1xEVDO network, the latest in Third Generation (3G) wireless data technology available. EVDO will give you 400 to 700 kbps and a top speed of up to 2.4 Mbps. You won’t ever get the 2.4 Mbps, this is its rated test environment speed, but its nice to know that maybe one day, if you were up at 4am and the only one connected you could theoretically achieve this throughput, standing directly under the tower mind you.

When checking email and just plain old kickin’ it around the web, I really couldn’t tell the difference between the Telus 3G network and my 4 Mbps cable connection. It’s just as snappy and more then adequate to get you around the net. The only time you notice that you are not on cable is with large file downloads.

Be warned, this is not for your leisure time surfer, online poker player or mobile gamer. The service is targeted to the corporate end-user and business professional. They are the only ones who can justify the cost of this service, if you use it as just as you would at home, you will end up with triple digit bills. And trust me, with this speed, its easy to forget you are wireless.

Telus has a $5 plan with pay-per-use fees, so as soon as you go to a website you are billed $15, with that $15 you get 1.5MB of data and are charged $15 for each additional 1.5MB. This would be for an infrequent business traveler that only needs access once in a blue moon. The service is there for you when you need it – your only paying $5 per month to keep it active, but when you need it, you will pay.

The one up from there is the $20 plan, you get the first 1.5MB of data included and you still pay quite a bit per additional MB after that. There are a few more plans in between, with the biggest and best plan you can get being $100 per month, with 250MB of data included and $3 for each MB over the 250. The average website is under 200K in size, the Yahoo home page for example is 55K, you do the math and figure out what you need.

Here’s the kicker. Both of these cards tested work on CDMA 1x and EVDO. EVDO is found in more developed areas, while the CDMA 1x is older and in not so densely populated areas. Regardless of what network you are on, you still pay the same rate, however the difference between the two is drastic. On the CDMA 1x network you can expect between 40-60 kbps, on the EVDO, 400-700 kbps.

Telus now offers two notebook PC cards, neither will work on the Mac platform, so a Windows-based notebook with an available PCMIA slot is required.

The first up, and probably first to get phased out, is the Sierra Wireless AirCard 580. It offers 400 to 700 kbps and averaged out at around 550 kbps, the slower of the two.

Besides it being 200-400 kpbs faster than the Sierra card, the built-in antenna has more flexibility and you can point it in almost any direction, out windows or doors, and get a better signal, the Sierra card antenna is restricted to only one axis.

The Kyocera KPC650 has support for dual external antenna jacks. Telus sells the optional external antenna that straps on the back of your notebooks LCD for $149.99, it will improve reception by about 20-30%. I suggest if you get the service you get the antenna. If you don’t mind the wait, you can grab it for about half the price directly from Kyocera Wireless.

Download speeds with the Kyocera card were slightly faster than the Sierra card. Head to head it performed about 20 kbps above the AirCard 580. With the optional antenna, it blew past the AirCard 580 at around 100 kbps.

Regardless of these speeds, it is all dependent on two variables; your distance from the tower, and how many other users are on the network.