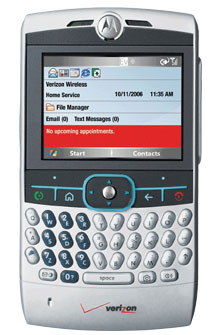 Delays can really hurt a product’s launch. We’ve heard about the Motorola Q for ages now, and when it was first announced, they had all the tech blogs drooling over its long list of incredible features. Since that time, we’ve seen unveiling and/or release of several other smartphones that easily give the Q a run for its money, so when this device actually does drop, it probably won’t make as much of an impact on the market as we first anticipated.

Last month, we caught a glimpse of a promotional website that was saying that the Motorola Q would start shipping in “April 2006”, but it soon changed to “Coming Soon”, so we figured that there was yet another delay, and we would never get our hands on the Q. Well, it seems the smartphone has found its way onto the Verizon website, complete with the service provider’s badging, so we are that much closer to an official launch. And yes, that ugly red banner is there too.

There’s not much else that we know at this time, but if they want to stick to the “April 2006” launch that was previously “announced”, they still have a little over a week to do so.