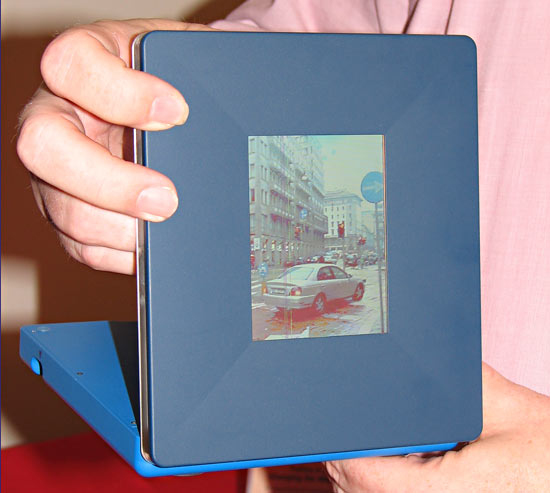 The details are still pretty slim, but we do know that the crew over at Fujitsu Computer Systems – the makers of all those great notebooks and other good stuff – are working on some e-paper technology that they hope to launch into the marketplace under a variety of guises. The prototype was shown off to news reporters at the company’s Sunnyvale, California offices recently, and we can’t wait to see them in commercial use.

The great thing about e-paper is that it requires no power whatsoever after an image is loaded, just like something you shoot out of your inkjet printer, except it’s quickly and easily reusable, not to mention that there is no “ink”, per se. Rather, the flexible 320 x 240 pixel color display makes use of liquid crystal technology (similar to that found in LCD monitors).

While earlier reports had people thinking that the applications would include magazines and newspapers, Fujitsu “believes it will be useful initially for displaying prices in stores and schedules in train stations or airports.” Larger prototypes are also in the works.