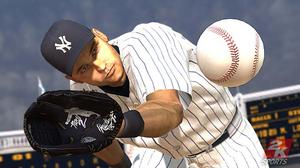 As baseball season is now in full swing, it’s only fitting that you can take the game with you on the road with Major League Baseball for the Sony PlayStation Portable. Developed by 2K Sports — originally an off-shoot of ESPN — this new title is essentially a port of the game that was released on the home consoles a couple of months ago.

Just like most other PSP titles, you’ll get pretty much the same game that you’d be able to play in your living room on your PlayStation 2, but of course they throw in an extra or two to entice you into opening your wallet and making another purchase. You’ll get the same Swing Stick control, Payoff Pitching system, and commentary from Joe Morgan and Jon Miller, but they’ve added a Home Run Derby Mode for your portable gaming needs. Nothing new here if you’ve ever played a baseball video game.

Major League Baseball 2K6 for the Sony PSP has already started shipping, with a suggested asking price of about 40 bucks.