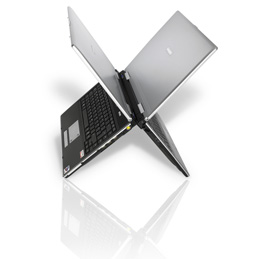 Transtec may not be the biggest name when it comes to notebook computers, but they seem to have quite the following over in the United Kingdom where the company is based. Two new series are being released, the LEVIO 210 and LEVIO 550, both of which are available with Intel Core Duo processors.

The 210 weighs a mere 1.95 kg (4.3 pounds), and is designed for the user on the go. Although they’ve kept the size to a minimum — there’s only a 12-inch widescreen display here — Transtec has managed to cram a full-size keyboard into the mix, as well as integrated 802.11a/b/g wireless and a PCI Express Bus Architecture. Available in ivory and black.

For a little more juice, you can turn to the LEVIO 550 series, which has a substantially larger 15.4-inch widescreen (though not as big as those 17-inch behemoths out there on the market). Video conferencing is a breeze with the integrated VGA camera, and the 550 (2.8 kg) is only about an extra kilo than its 210 brethren. You can even get Linux preinstalled instead of Windows.

Both laptops should start shipping early next month at prices dependent on configuration.