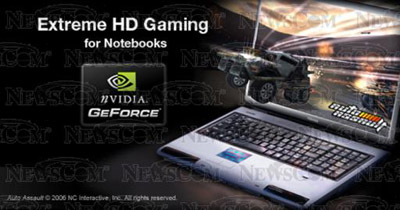 NVIDIA is at it again, with a brighter and more powerful GPU set aimed at extreme gamers and their notebooks.

The GeForce Go 7900 series of graphics processing units is, for now, two models, the GS and the GTX. They feature support for the very latest in extreme hi-def games, with super-high-quality visual and audio quality, lightning-fast hardware, and state-of-the-art 3D graphics effects.

According to Jeff Fisher, NVIDIA’s senior vice president on the GPU side, the home-theater-quality XHD resolution runs to 1920×1200. “The result is a greatly enhanced level of realism and immersion for gamers on the go,” Fisher said.

These GPUs were built with Vista in mind as well, with a built-in compatibility with the next Microsoft OS.

You can find these GPUs in the just-released Dell XPS laptops, as well as other offerings from Toshiba. Gateway, Hypersonic, Vicious PC, and others will soon sport the Go 7900 GPUS as well.