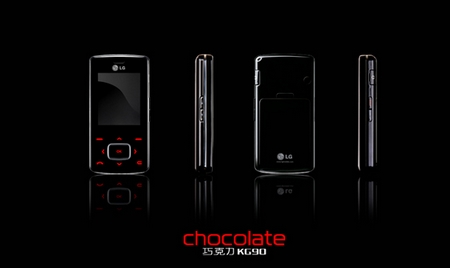 It’s not fair. I tell you, it’s not fair. South Korea gets so many juicy handsets from the likes of Pantech, Samsung and crew, and here we are in North America stuck with their hand me downs and outdated handsets. The LG Chocolate phone has been a huge success in the company’s home country, and they’ve finally decided to give the hugely popular slider an international passport.

There are official reports indicating that a tri-band GSM version of the LG Chocolate phone is heading to the Chinese market. Other than the switch over from CDMA, the feature set is expected to remain much the same as its Korean counterpart, complete with multimedia functionality and digital camera. They’ve even launched a cute website to commemorate the occasion, located at ichocolateyou.com.

The plans are to price the LG handset — to be dubbed the KG 90, while also still known to everyone as “the Chocolate phone” — at about 3960 RMB (~$495 USD). It seems that only the dark chocolate variety will be initially available, though I wouldn’t be surprised if the white and pink versions find their way over there eventually. Meanwhile, we here in North America just have to wait… and wait… and wait.